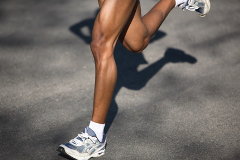 I used to be a runner. Running was my thing. (Well, in high school, anyway.) While training during the off-season, I would run about five miles a day from my front porch and around my neighborhood. Now, when I say neighborhood, I am referring to a massive chunk of rural real estate that had five houses, hundreds of cows and horses, and a mile between each corner.

Then, running began to hurt. Cramps in my legs, twinges in my knees, and sharp pains down the front of my shin had me cringing at the idea of putting on my sneakers. Each day became more torture than fun and I knew something wasn't right.

So, off to the doctor we went. I described the pain as he pushed and prodded on my leg. Then, by chance, he glanced down at the floor where my sneakers were laying. He froze in his investigation, reached down and grabbed both sneakers, holding them up for inspection. There was a dramatic difference between the bottoms of the shoes. Where one side was worn down, the other was fat on both the inside and outside of the foot. They looked horribly misshapen and I realized immediately what was going on.

"How did you do this to your sneakers?" the doctor asked.

"Do you run the same path each time?"

Turns out that running on that same path was damaging my body. The road has a slight slope to it in order to help the rain water run into the ditch instead of just forming puddles on the road. By running the same path, I was causing repetitive wear on my shoes, which in turn, began to injure my joints and bones. I needed a new pair of sneakers and a new path.

Life is all about paths. Many of us are stuck running the same path over and over again. We know where it leads and we find ourselves in pain (again). We recognize that old path with thoughts like "Well, been down this road before" or "Gee, this is familiar territory". For some of us, it isn't our knees and ankles that hurt, it is our heart. It's our relationships. It is our outlook on the world. It is the way we see ourselves.

Once I realized that running the same path was only hurting me, I changed the place where I ran. Because of that, each day was a new discovery, a new avenue I hadn't seen before, and a day without the same old road causing me the same old pain.

The Trek offers a new avenue full of discovery and recognition that your old paths are, well, old. It is a journey to find the patterns that hold you captive and give you the tools to break free. It is a chance to trade out the old worn sneakers for a new pair built for a new path.

The Trek is an online personal development curriculum designed for the every-day person. For more information, please visit thetrek.org.