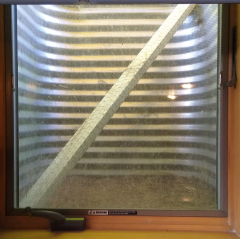 A few days ago, I was awakened at 4:00 a.m. by a large crash, followed by some animal yelling in irritation! Whatever it was had fallen three feet, through a screen, into the window well outside our bedroom. Oh, and did I mention it was yelling something? (I’m glad I couldn’t understand it because, judging by the tone, it was NOT G-rated!)
I shoved the dogs off of me – they like to sleep curled up next to me – and stumbled over to the window...and, of course, I can’t see. It IS 4:00 a.m.! I hear something moving and bumping around in the window well and still making an awful racket! Grabbing my phone, I turned on the flashlight, held it up to the window...and then threw it across the room!
A skunk had fallen into my window well and was now VERY irate at having fallen three feet and then being blinded by a human!
I grabbed everyone and everything asleep in the room and shoved them out as quickly as possible! For some reason, I just figured that two dogs barking and howling at it would push the skunk to an even more unhappy place…
Now, I have a little problem – no, actually I have a BIG problem – and no clear way to solve it! (Especially at 4:00 a.m.!)
So, like all good techie people who are awakened in the middle of the night, I pulled out my phone and looked up “what to do if a skunk falls into your window well”! Surprisingly, Google completes the sentence before I do! (Apparently this is a fairly common thing..?)
My list of options are...not good. Apparently I can shoot the skunk...and hope it doesn’t spray as it dies. I can call in a “professional” who charges a lot of money...and hope it doesn’t spray as they remove it. I can – and I am NOT making this up! – approach the skunk “calmly and quietly” with a board covered in chicken wire that will allow it to climb up and out...and hope it doesn’t spray me on the way past!
In my head, I have another option: I can cover the window well with a board, weigh it down with bricks, close the bedroom door, and just pretend that the bedroom no longer exists! And I’ll be honest, at 4:00 a.m. that really did seem like the best choice! No cost! No risk! No fuss! No muss! The problem is gone and forgotten, right?
The problem is that if I do cover it over, the issue I have hasn’t really gone anywhere! Instead, I lose part of my living space, I lose time and energy and resources that I could use elsewhere, and the “issue” is going to affect other areas of my life when it starts to decompose right beside my house!
But we do that sometimes, don’t we? We experience something and, rather than dealing with it directly, we try to cover it over. The issue we have doesn’t go anywhere, we just try to hide it...or hide FROM it…
But just like a skunk in a window well – that should become some sort of saying, shouldn’t it? – the issue doesn’t just “disappear”. There are consequences when we ignore an issue in our lives and try to pretend it doesn’t exist. Not only do we give up a part of our lives now; but sooner or later, it begins to affect other areas as well.
So, if we don’t try to cover up our problems, then what’s the solution? We make the choice to deal with the issues; we confront them right away when they’re still small and more manageable; we take the best steps to resolve them; we find ways to move forward; and we learn from the experience.
Oh, and in case you’re wondering how I dealt with my problem, I made a board covered in chicken wire, bravely dropped it into the window well, and then even more bravely ran away! The skunk got out on it’s own, we’ve left the board in place so other animals can crawl out, and we have a bedroom again!
May your early mornings always be skunk-free and we hope you enjoy your journey!

Lessons From Filming (Round One)