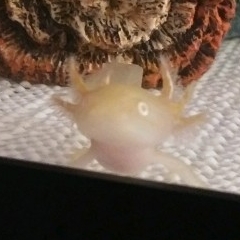 The Measure Of Grief

A few months ago, my daughter decided that she wanted a pet; but, not just ANY pet, she wanted something...unique. Taking into account her budget, the amount of space in her room, and a lot of other factors, she decided on the perfect critter: an oxalatal. (Just in case you’re like me and have never heard of one before, they’re a smiling, aquatic salamander!)

She worked through the summer, saving money to buy the tank and the other things an oxalatal needs to be content. She chose brightly-colored plants, a special “feeding bowl”, and more. Then, after it was all set up, we went to an exotic pet show that was being held, quite literally, in the middle of nowhere!

She brought her new pet home, named him “Cypher” - that’s a long story – and he settled in.

Strangely enough, oxalatal, unlike other salamanders, actually like humans! (The rest don’t seem to care either way.) When my daughter would wake up in the morning, she would call to Cypher, and he would come over to see her. If you talked to him, Cypher would swim over and play. All-in-all, he was very cute.

A few days ago, Cypher stopped eating normally. He still had energy, still came when called, and otherwise seemed normal. Yesterday morning, he was fine. I took my daughter to an orthodontist appointment, we came home, and I settled down to work on Trek. As I was walking to my desk downstairs, I head my daughter call my name in a tone that I had never heard before.

When I ran upstairs to see what was wrong, she pointed to her aquarium. Cypher was dead. Our dog, Priss, and I spent the next 20 minutes or so snuggled up to my daughter as she cried. She cried when Maria came home. She cried as we buried Cypher in our backyard.

Later, on a walk together, my daughter told me that she blamed herself for Cypher’s death – which isn’t true, as far as I know. She kept asking, “What if I had done...differently?” “What if I had paid more attention?” “What if..?” When we returned home, she told us, “I keep looking to Cypher’s aquarium, expecting to see him there.”

Now some of you may be thinking, “It’s just a salamander. She only had it a few weeks. How big of a deal could it be?” To my daughter, Cypher meant so much more! He was a friend, he was someone that she talked to, someone who was simply happy to see her when she talked to him.

Her reaction to grief over the loss of her “friend” is both real AND appropriate.

Grief is the process we go through that allows our brains to readjust after a loss. In other words, we’ve built a pattern – my daughter was used to seeing Cypher and talking to him – and now that pattern has changed – Cypher is no longer there. Because of that, our brains need to make changes, to rewire themselves to accommodate the new situation.

A loss – any loss – is something that we CAN grieve. This can include the loss of a friend, a job, a pet, or a parent. Also, grief isn’t restricted just to death. You can grieve the loss of trust if someone betrays you, the loss of safety if you have been in an accident, the loss of innocence if you’ve been abused, and a lot more.

There is a lot more to grief than I can cover here, but I wanted to give you two tips for dealing with grief in your life:

(1) Realize that it’s okay to grieve.
One of my biggest pet peeves is when someone looks at another person and says, “You shouldn’t cry over that!” Actually, you should! If you feel the emotions, if you’re sad or angry or afraid, you NEED to let them out! If you fake it, if you stuff your emotions deep down, then they WILL hurt you by creating stress. It’s better that you grieve, that you experience and release your emotions, and that you allow your brain the opportunity to readjust. You cannot do that if you avoid your grief!
(2) Seek out others.
Grief and the feelings it brings can separate us from others, if we let it. Because I’m feeling overwhelmed, it’s easy to turn away from others and turn inward, instead. Speaking as a parent, it was my honor to walk alongside my daughter – literally – as she grieved the loss of her pet. It’s my honor to do that for others, as well. I may not have the answers they’re looking for, but I have sat there, hugged the person, and let them cry. Don’t shut out those who want to help you.

My daughter is going to clean the aquarium and set it off to the side, for now. Eventually, she says she’s going to find another pet. In the meantime, she has some good memories of a good pet, a good friend; and though she misses him, she’s realizing that he’s never truly gone as long as long as she remembers him.

If you’re grieving today, know that there are many others that want to walk beside you on your journey. It may be hard right now, but you can do this and you don’t have to do it alone!

Dedicated to the memory of Cypher.