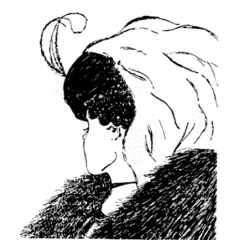 What Do You See?

A couple of months ago, we were at the Couples Retreat at Crescent Lake Bible Camp. During one of the sessions, the speaker handed out an image to the participants and asked the couples to think about what they saw on the paper. After a few minutes, the speaker went on to explain that there wasn’t just one answer to the question – there were two. Even though the drawing was just dark lines and white space, there were two ways to view it.
You may have seen the image before. From one perspective, it looks like a young woman, in a fancy wrap, looking away from you, with a feather in her hair. From the other perspective, it looks like an old woman, a scarf covering her dark hair, chin tucked into a fur coat that is pulled closely to her face. Both answers are right and you can see both without rotating the page, adjusting the corners, or looking at it from any specific angle. (We’ve attached the image to this post, so feel free to play with it!)
With that information, the idea that there was another way to view the image, most of the couples took a second look. Slowly, a few of the participants began to see what he was talking about; however, it was clear that not everyone was finding both women.
As an observer in the back of the room, I watched as people were shaking their heads in frustration. Even knowing what they were looking for, many couldn’t see the second image! Eventually, they would tell their spouse that they couldn’t see it, and that’s when something amazing happened...
Their spouse would then lean in and slowly identify the parts that would help their struggling partner make sense of the missing answer. Pointing at the curved line and showing the eye of the old woman, or pointing at the jawline of the young woman. Carefully, patiently, and with great detail they explained the two images until you could see the light bulb come on and their partner saw the whole picture from both perspectives.
I bet that doesn’t happen on a normal day.
How many times have you encountered a situation where you couldn’t see the other person’s perspective and it ended in an argument? How many times have you struggled to understand what they are saying or where they are coming from, and it broke down? How many times have you been frustrated by something that seemed obvious to you but the other person just couldn’t see it?
What if, instead of reacting in anger, we took the time to carefully, patiently, and with great detail help others to understand what it is that we see and, at the same time, try to understand their perspective? What if everyone we interacted with were willing to do that for each other?
Do you have relationships where just taking a few extra minutes and calmly pointing out a certain detail would help shift the entire interaction? Would understanding someone else’s perspective – not agreeing with it, but simply understanding – change the way that we treat each other?
Next time you are trying to help another person understand what you see, remember that they may only see the old woman and need a bit more information to shift their perception to see the young one, instead.
We hope you enjoy your journey!