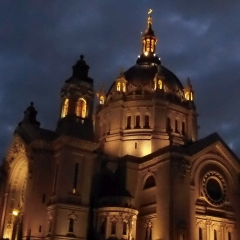 A few years ago, Maria and I had to go to the Twin Cities – Minneapolis and St. Paul – for a conference. Having grown up in that area, having lived there for part of my professional career, I have to tell you that I LOVE the Cities. My family and I have visited the Como Park countless times; been to the Minnesota State Fair; and visited the Science Museum over and over.

This time, as we were walking back and forth from our hotel to the conference center, we had to pass by the St. Paul Cathedral after dark. (It was mid-winter and “dark” came at around 5:30 p.m.) One day, while walking past, we decided to go in.

As we entered, we were immediately awed by the architecture of the building. Being history geeks, we read every plaque and poster describing the construction of the Cathedral; and then we simply wandered around and admired the artwork. After a little while, the choir began to practice and it sounded like angels singing! (Not that I know what angels singing sounds like, but you get the idea!) So we sat there, in silence, just enjoying the beauty of those songs in that place.

All-in-all, it was a highlight of the trip...until…

After the choir was done, we heard the sound of someone coming into the Cathedral. (The acoustics are...amazing...and so it’s kind of hard NOT to notice!) When I looked around, I saw a young woman walking down the center aisle and, despite the church being mostly empty, she sat down in the benches directly across from us. You could tell from the look on her face that she was hurting.

I sat there and looked at her – I don’t think she noticed us – and thought, “I should go and ask if she’s all right.” Then, another voice in my head said, “It would be awkward.” Then an argument began for real inside me with half of me wanting to reach out to make sure this stranger was all right and the other half worried about how uncomfortable it would be. I don’t know how long I debated with myself, but before I could do something, she got up, sighed deeply, and walked out.

As she left, Maria sighed, too. I turned to look at her and she said, “She looked so sad that I really felt I should go talk to her, but I was afraid of how weird it would be for a complete stranger like me to say anything...” I then shared my experience.

Fear kept us in our seats. Not “big” fears, we weren’t “terrified” or “frightened”. Instead, it was the little fears, the ones that whisper to us about how “uncomfortable” something might be. Maria and I missed a chance to try to help someone in trouble because it could be “awkward”, “strange”, or “weird”. Instead, we let her walk out and we wonder what became of her.

What about you? Are there people you want to reach out to, but are afraid it might make a situation “uncomfortable”? Are there people you know who are hurting and need help, but you’re afraid talking to them might be “awkward”? Don’t let fear stop you from doing what is right, and helping people is always “right”!

This article is dedicated to a woman who’s name I may never know and who’s story I never asked her to share.