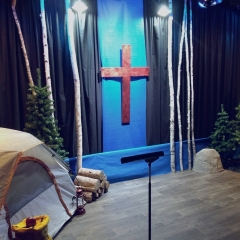 Is The World Out To Get You?

All right, I have to confess something! When we sat down to work on Trek 2.0, I thought it would be, well, easy. There was still going to be a lot of research, a lot of writing, a lot of feedback to sort through, and a lot of filming, but we’d already done that before, right? So, how hard could it be? It SHOULD be easy! (Yep, that would be an Expectation right there!)

The first sign that my expectation would go unmet was when Maria’s job shifted when some critical employees left just as we were gearing up. This meant that she had to work longer hours and I got drafted to help fill in the gaps.

Then, the power company showed up and began to reroute the utilities. Much of the summer, when I wanted to be filming, was occupied with listening to very large, very loud machinery drilling holes all around our block to bury the power lines. While this is a good thing because we’ll have less power outages, it’s rather difficult to film when the entire building is shaking…

Then, after studying the footage from our first successful film, we realized that the camera angles needed some adjusting, there were changes needed to the set, and that our lighting wasn’t quite right.

Finally, months after I was expecting the project to be well underway, we had our FIRST usable footage. I sat down at the computer, put the videos in, and started editing. And the system crashed… I rebooted, and tried again. Part-way into the edits, the software crashed again. I called tech support, I spent hours on the phone and in emails, and finally had to abandon the software we paid for; it simply wasn’t going to work.

I downloaded one of the best-rated video editing packages and set to work learning the new software. We finally managed to produce our first three Bridge 2.0 videos. We were moving forward at last! On the fourth video, however, the software decided to change the color of my shirt, just for fun! And so, it was time for another round of Tech Support! (They had no idea so it’s that way...for one video!)

When I look at the past few months, it’s easy to become convinced the world IS out to get me! I take a series of events, I put them into a narrative – a story – that shows how everything that is going wrong is connected in some way; that there is some underlying “force” that’s trying to sabotage me! I am the victim, the world is to blame!

When viewed together, it’s a conspiracy; when I stop and Reality Check each event it’s clearly a coincidence. Even worse, the feelings of frustration are wholly my fault, because my expectation – that this will get done when I WANT it done – is unrealistic and isn’t mine to enforce. Basically, I set myself up for failure.

Today, if you’re in the trenches and it seems like the world is out to get you, stop and take a “Time Out”. Breathe. Journal. See if it everything IS going wrong or if you’ve connected a series of events that really have no relation to each other. If you do, it may help you to let go of some unrealistic expectations and focus on what you can control instead of wasting time on what you can’t.

We hope you enjoy your journey!