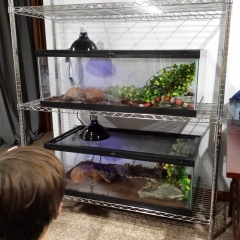 As I sit down to write today, I’ve become more and more amazed at how interconnected the world is; especially the oddball connections that we aren’t even aware of and never really think about!
Before we get too far, I need to confess two things:
First, we have snakes in our house. A few years back, we bought snakes to use in teaching Environmental Education programs to students through the Northern Lakes Impact Center (www.northernlakesimpact.org). They are kept in our home and we do occasionally “snuggle” with them so that they remain accustomed to human contact. Please don’t misunderstand, we are NOT “snake people” who let 25-foot-long pythons wander freely through our house and sleep in the same bed! Our snakes have comfortable tanks and only come out when we need to teach with them or we want to clean their cages.
Second, we live-feed our snakes. In other words, we get live mice, toss them into the aquariums with the snakes, and, well, we let nature take its course. We’ve had people tell us that live-feeding is “inhumane” or “barbaric”, but the simple fact is that even though we’ve tried to feed our snakes frozen mice, no matter what we do, they won’t eat them. We’ve tried every trick that every person – and about a dozen snake experts – have recommended, and ours simply prefer live mice.
So, what does any of this have to do with...anything?
Well, we went to our local pet store to buy mice for our snakes and we were told that the mice the store had on hand would be all of the mice they had available until “the crisis ends”. In other words, because of COVID-19, we wouldn’t be able to purchase live mice to feed our snakes until the government says they can ship them again!
Now, normally I don’t go in for buying crazy amounts of...anything. We didn’t rush out and buy 20 packs of toilet paper when the run on supplies began a few weeks ago; we didn’t convert rooms into storage and then lay in three months worth of food; and we didn’t buy tons of ammunition. Maybe it’s naive of us, but we didn’t think it was fair to buy car-loads of stuff because we wanted to make sure that other people could buy the supplies they needed.
On the other hand, I walked out of the pet store with six mice – that’s a 45-day supply of mice at the rate our snakes eat! (In my defense, there were still over a dozen left in the tanks!)
But as I sit here today, I find it amazing how much things are connected! A virus breaks out in China and, because of travel, it spreads to the world. People who are exposed and/or infected leave the cities and come to Wisconsin because they think we’re safer and have more access to supplies in rural areas! (Betcha they were shocked when they tried to buy toilet paper at our local stores!) And because of “social isolation”, we can’t buy mice to feed our snakes. One event in one country has changed the entire world in both big and small ways!
It makes me wonder what one positive event could do..?
What if we focused on dealing with our own issues rather than pointing out other people’s shortcomings? What if we decided to heal the pain of the past rather than simply “coping” with it? What if we took the time to do one act of kindness for someone in our lives rather than deciding that it’s too much “trouble”? What if we stood up for someone who is being hurt by others rather than deciding to “not get involved”? What would the world be like?
For as crazy as some of the behaviors have been during this time, there have been some pretty inspiring ones, too. I know a family that had bought a lot of toilet paper BEFORE the pandemic who decided to hand out rolls of toilet paper free to their community. I know of Camps that have shifted from working with schools to serving the children and families of those who are considered “essential”. I was just reading last night of groups that have gone out to offer food and supplies to the homeless, since shelters have been forced to close down.
It sounds strange, but what will be the impact, long-range, of these actions? It may not change the world as quickly as a virus, but maybe these actions will become viral – maybe others will be inspired by them and look for ways that they can get involved. Who knows what difference a little extra love could accomplish?
I’ve said it before, but this week, why not find a way to make a difference? It doesn’t even have to be “big”; why not sit down and read a book with your children? Cook together as a family? Or leave supplies on the doorstep of an elderly neighbor?
Working together, maybe we can change our world, one roll of toilet paper at a time. :)
We hope you enjoy your journey!