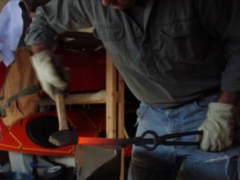 Tomorrow I get to teach "Blacksmithing" to a group of students from an area school for the Northern Lakes Impact Center. (www.northernlakesimpact.org)  This isn't just a demonstration, however; we're gearing them up in welding suits, goggles, and gloves, giving them the chance to form hot steel and to keep what they make!

I got started doing blacksmithing about eight years ago when we had a smith come to a Men's Retreat Weekend at Crescent Lake Bible Camp. Our first task? Turn round steel square. The next task? Turn the square steel round again. We were told that when we completed that task, we would either love blacksmithing or hate it.

Shortly after that weekend, I went out and bought an anvil and a forge. (You can probably guess my reaction to it based on my response.)

Last year, when I got to work with another school, I decided that I needed to put together a true "curriculum"; something Camp could use with students if I wasn't available. This summer, I spent my time putting the finishing touches on it and I wanted to share with you a story that I found while researching the class.

In an article called "Blacksmithing for Beginners", the author described the following experience:

There are no mistakes. Unlike wood, where you can cut it three times and it’s still too short, metal is recyclable. If a piece is botched, wait and give it another chance.

I once made a drive hook, a combination nail and hook that log cabin dwellers used to hang up their stuff. I realized when I had finished it that the nail was facing the hook. Worthless, I threw it on the ground and walked out into the cool night air. I was beating myself up for a lack of mindfulness.

My wise and loving mentor, Larry, walked outside and stood with me for a moment. “There are no mistakes,” he said in his lovely Alabama drawl. We went inside, he heated the hook with a torch and gave it a few twists, ending with the nail pointing in the proper direction. It was actually more beautiful than the original.

Based on this story, we teach our students what we call "The Blacksmith Credo":

"As with metal and men, there’s always a second chance…

And sometimes what’s created is more beautiful than what we had originally planned."

If you're still be forged in the fires, if you've been knocked around and haven't found who you are or who you're becoming, it's okay!

Just remember that there are no "mistakes" and what you can become - what you have the power to choose to become - may be more beautiful than anyone, including you, could have ever foreseen.

I just wanted to share this random thought as I prepare for teaching. Happy forging and we hope you enjoy your journey!