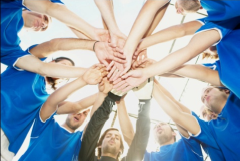 Good morning! (Or good afternoon / evening, depending on when you read this!) I’ve been on the run a lot recently. I’ve got two different series of talks that I’ve had to prep for, I’ve had some Trek behind-the-scenes tech to work on, and I was asked to lead a teambuilding event for a football team.
As I sit here, waiting for my team to come in, I’ve been thinking about my first teambuilding group ever. I want to share that story with you and, if I already have, I’m going to ask you to forgive me. For obvious reasons, it’s pretty much front and center of my thoughts. So, let me rewind the clock 30-ish years or so.
The Camp that I was working at had an alternative-to-incarceration group showing up to do a teambuilding event, and my boss asked me if I would lead it. I told her that I had never led teambuilding in my life, but I would be interested in finding out more. I was told, “Oh! It’s really easy!” Then she handed me a teambuilding manual with about a dozen activities in it.
My first hint that this might be a problem came when everyone then got in their cars and left Camp…
Being the good Staffer, I sat down and began to read the manual. In it, I learned something...incredible! Did you know that everyone, everywhere, absolutely loved to learn to work together? I was told that if I simply presented the activity, instantly everyone would pull together, work as a team, and embrace each other with love, compassion, and care!
While I had some doubts, the manual clearly stated it, so I let my doubts rest.
Then, about two hours later, my group arrived…. A van pulled in, and four armed guards got out. They unlocked the doors, and ten teens were released. Looking at these boys, those doubts I had earlier came back to me even stronger than before!
But I stood up, grabbed my “magical manual of teambuilding”, and walked over to greet them. As I came up and said “hi”, one of the armed guards looked at me and said something like, “These boys are a bunch of animals and this is a complete waste of everyone’s time!”
My smile froze on my face as ten very surly-looking teens glared at me. But it didn’t matter, I had the manual and this was my group; I’d see it through! So I started leading activities, just as the manual said to do it.
You know what? I discovered pretty quickly that the manual...lied to me!
The group started out as a nightmare and the experience went South from there! The boys fought, threatened each other, and pretty much refused to work together. Oddly, I didn’t see any sign of love, compassion, or care appear, either!
But as I worked with them, I noticed something odd. When the adults were standing off to the side, the teens did pretty well. When the adults looked back and started saying mean, sarcastic things to the boys, they fell apart. It wasn’t long before I realized an important rule:
We live up to our down to the definitions and/or expectations of others.
After watching this Jekyll-and-Hyde act for about half-an-hour, I asked the guards to move off away from the group and just shoot anyone who ran for it. With a little bit of grumbling, they did go away.
At that point, a teen leaned over to me and said, “Good! Now I can kill you!” I told him that he would have to wait until after I explained the rules for the next activity. Based on his expression, that was NOT the answer he was looking for!
But when the negative influences were removed, do you want to know what happened? This team started helping each other, supporting each other, and doing some amazing stuff!
In fact, they set a record for an activity that has stood in my record books since 1994! And, I’ll give you a hint: I’ve led thousands of teambuilding groups since that time, and no group – no matter how high-performing – has never come close to what a group of “juvenile delinquents”, boys who I was told were a “waste of time”, could do! Actually, I don’t think any group has come within a MINUTE of their score! (If your group wants to take a shot at the title, pop me an email and I’ll explain the game!)
All it took was getting rid of the negative voices so that these young men could be who they were meant to be!
So I’m hoping that y’all see an obvious tie-in to The Trek… The question I have for you is, “Who are you letting define you? Who has set unrealistic and inappropriate expectations on you?” To move forward, you need to identify those, deal with the damage they’ve caused, and rewrite the definitions so that you can become...brilliant!
Again, if I’ve shared this recently, chalk it up to the fact that I’m prepping to lead teambuilding and I’m thinking about the different groups I’ve worked with. Now, if you’ll excuse me, I have a high school football team that’s going to show me how amazing they can be! (I’ll try to get other posts done later, but I just wanted to write this one while I had a few minutes!)
As always, we hope you enjoy your journey!
- The Trek