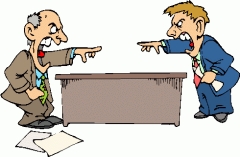 Reasoning With The Unreasonable (Round 1)

I have to confess something here: when I sit down to write, I usually look at something that has happened and/or is going on in my life and then pour out my thoughts on that subject here. This makes it easier for me to write, as I can give you actual examples of things that you may encounter and discuss the tools that I – and others – use to deal with them.
But recently, I’ve encountered something...interesting. In a LOT of conversations that I’ve had, many people have asked me what they should do about unreasonable people; and I’ve even encountered some of those people in my own life, as well. So, today, let’s talk about reasoning with unreasonable people.
The first thing that you need to do when you think you’ve encountered an unreasonable person is to ask yourself: Are they unreasonable...or is it me? To figure that out, let me give you a quick quiz:
Now, if you’re reading this and looking to apply it to your own life, you NEED to be careful! Write these sentences in a journal and take a good, long look at your own life. You may find that the unreasonable person is...you. If that’s the case, you need to work on two main areas:
First, Check Your Perceptions/Expectations. Most disagreements between two people stem from the fact that we each see the world differently and then build our expectations based on what we see.
Recently, I was in a room where a reality TV show was playing. I really started paying attention when a man and woman started arguing and the man said to her, “Honey! The men are talking now, so be quiet!” Do you see the perception he has for how the world works? Do you see his expectation for women?
The other man on the show came slightly...unglued! He stood up for the woman and told the man, in no uncertain terms, that she had the right to speak and be heard. (I thought he was going to go over the counter and try to make the guy understand, actually!) This man, too, has his own perceptions and expectations for how women should be treated and, because it was different than the first man, they almost came to blows!
Because these two men had strong, equal, opposing perceptions and expectations, there was conflict! Makes sense, right? Someone is challenging what we believe to be true and, to defend those beliefs, we...defend those beliefs. We don’t stop to question whether we might be fighting the wrong fight; clearly the other person is to blame!
What are the perceptions and expectations that you’re bringing to the conflict? Are they appropriate to the situation? Are they yours to enforce? Are they reasonable? If you find that part of the conflict is coming from your own perceptions and expectations, it’s easier to switch from an “argument” to a “dialogue”. (Care to guess which one of these is healthy?)
Second, Focus On Forgiveness. If you find that part of the problem is yours, then own it, and ask for forgiveness. This is NOT saying that it’s “all your fault”; but you need to own the parts that ARE your fault. If you spoke in anger, if you called them a name, if you reacted instead of responded, make it right. A sample conversation could sound like:
“Thank you for taking the time to talk to me today. We’ve been arguing recently, and I’ve come to realize that my behavior has not been fully healthy or appropriate. I’m sorry for the way I’ve spoken to you. Will you please forgive me?”
You may be surprised at how much that simple paragraph can defuse a situation and allow both of you to be heard, understood, and to come to a place where you can either reach an agreement or simply agree to disagree. If you find that you’re at fault, own it, ask for forgiveness, and then move on.
So, that’s Round One for “Reasoning With The Unreasonable”. Next time, let’s talk about what to do if the person truly IS unreasonable! Until then, we hope you enjoy your journey!
- The Trek

The Awareness Of Definitions

Own It – The Positives